Stimulating the ear with a hand-held device the size of a mobile phone may be a new way to treat the most common heart rhythm problem, atrial fibrillation (AF).
This is where the heartbeat is irregular and often abnormally fast – around one million people are affected. Patients can often feel their heart pounding in their chest – known as palpitations – for a few seconds at a time.
Researchers say stimulating a nerve in the ear that also travels to the heart can prevent or reduce symptoms such as dizziness, shortness of breath and tiredness.

Animal studies and one trial involving 40 people have shown the new device can be effective in reducing the duration of attacks. A long-term clinical trial is underway with 52 patients comparing it to a placebo.
AF occurs when abnormal electrical impulses suddenly start firing in the atria (the heart’s upper chambers). These impulses over-ride the heart’s natural pacemaker, which can no longer control the heart’s rhythm.
Why this happens is not well understood, but people with high blood pressure or furred arteries can be more at risk.

A normal heart rate should be between 60 and 100 beats a minute at rest in healthy adults, but in people with AF, the rate can be considerably higher than 100. This raises the risk of a stroke because when the atria are not working correctly, blood can pool there and clot.
Patients with long-standing AF are also at risk of heart failure – when the heart stops pumping efficiently – because it becomes worn out over time.
The condition is usually treated with drugs such as beta-blockers, which reduce heart rate, or patients can be given an implanted pacemaker that helps the heart beat regularly. Another option is cardioversion, where the heart is given a controlled electric shock to restore normal rhythm. 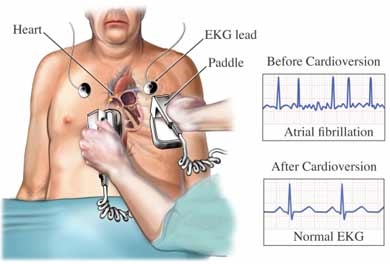 Advances in the Treatment of Atrial Tachyarrhythmias: Pacing, Cardioversion, and Defibrillation

Research on dogs with AF, by the same team leading the latest human trial at Oklahoma University, found that vagus nerve stimulation reduced the duration of outbreaks and symptoms.
A study of 40 patients showed a reduction in symptoms by up to eight minutes after a single treatment, compared with no change in those treated with a placebo, according to the Journal of the American College of Cardiology.
In the new trial, 52 patients will be treated with electrical vagus nerve stimulation or sham treatment for one hour daily for six months.