JOHOR BAHRU — A fire at Johor’s largest hospital killed six patients and injured 11 people on Tuesday, officials said. The blaze, which broke out at the Intensive Care Unit (ICU) on the second floor of the Sultanah Aminah Hospital in Johor Baru, also forced the mass evacuation of patients and medical personnel. 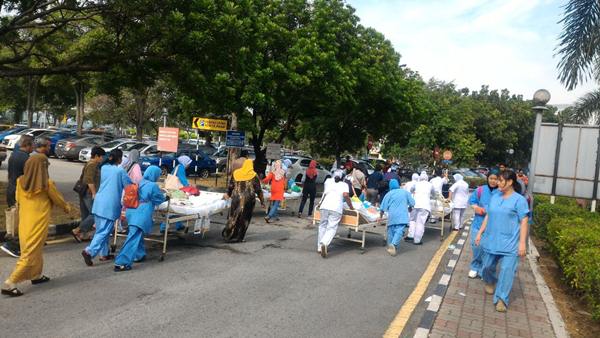 The fire broke out around 9am, and its cause is still unknown, according to a statement from Malaysian Health Minister Dr S Subramaniam. But the Associated Press quoted Johor Bahru (South) Police assistant commissioner Sulaiman Salleh saying that an initial probe showed that faulty wiring may have started the fire.

The six who were killed, four women and two men, were patients in the ICU. A seventh patient in the same ward, a man, survived the blaze but suffered 80 per cent burns on his body. The victims were all in their 50s.

“We believe that all the victims died due to suffocation caused by the thick smoke in the ward,” Mr Sulaiman was quoted saying by The Star.

Ten hospital staff members were also injured during the fire, Dr Subramaniam said in a statement. He added: “My thoughts and deepest sympathies to the families affected by this unfortunate incident. On behalf of Ministry of Health we would like to offer our deepest condolences.”

Patients from the maternity ward — which was evacuated — were also seen being led away from the burning building, reported the New Straits Times.

The Sultanah Aminah Hospital is the largest in Johor state and have been used by members of the Johor royalty in the past.