The “seeds” of Alzheimer’s disease may be transmitted from one person to another during certain medical procedures, scientists have found.

A study into people who died of a separate kind of brain disease after receiving injections of human growth hormone suggests that Alzheimer’s may also be a transmissible disease.

The findings have raised questions about the safety of some medical procedures, possibly including blood transfusions and invasive dental treatment, which may involve the transfer of contaminated tissues or surgical equipment.

The investigation has shown for the first time in humans that Alzheimer’s disease may be a transmissible infection which could be inadvertently passed between people.

Scientists emphasised that the new evidence is still preliminary and should not stop anyone from having surgery. They have also stressed that it is not possible to “catch” Alzheimer’s by living with someone with the disease.

However, the findings of a study into eight people who were given growth hormone injections when they were children have raised the disturbing possibility that Alzheimer’s can be transmitted under certain circumstances when infected tissues or surgical instruments are passed between individuals.

Until now, it was thought that Alzheimer’s occurred only as a result of inheriting certain genetic mutations causing the familial version of the disease, or from random “sporadic” events within the brain of elderly people, said Professor John Collinge, head of neurodegenerative diseases at University College London.

“You could have three different ways you have these protein seeds generated in your brain. Either they happen spontaneously, an unlucky event as you age, or you have a faulty gene, or you’ve been exposed to a medical accident. That’s what we’re hypothesising,” he said.

“It’s important to emphasise that this relates to a very special situation where people have been injected essentially with extracts of human tissue. In no way are we suggesting that Alzheimer’s is a contagious disease. You cannot catch Alzheimer’s disease by living with or caring for someone with the disease,” he added.

The eight adults, aged between 36 and 51, all died of Creutzfeldt-Jakob disease (CJD) after receiving contaminated hormone injections as children. But autopsies on their brains also revealed that seven of them harboured the misfolded proteins associated with the early stages of Alzheimer’s disease. It is unheard of for people in this age group to have such proteins.

The scientists did not find the “tau” protein tangles associated with the later stages of the disease, which means the seven individuals did not have full-blown Alzheimer’s, although they may well have developed it had they not died of CJD, Professor Collinge said.

The study, published in the journal Nature, eliminated other possible reasons for the presence of these so-called amyloid-beta (A-beta) proteins and came to the conclusion that they were most probably transmitted as protein “seeds” in the growth-hormone injections.

Questions remain about whether these protein seeds could also be transmitted on surgical instruments used in other operations. It is well-established that the prion proteins behind CJD and Alzheimer’s stick to metal surfaces and can survive extreme sterilisation procedures such as steam cleaning and formaldehyde.

There is also the question of whether Alzheimer’s disease could be passed on in blood transfusions, given that animal experiments have shown this to be possible.

“It is not clear here that this is relevant to blood transfusions, and epidemiological studies have been done in the past looking for links between Alzheimer’s disease and blood transfusions and they have not shown an association,” Professor Collinge said. 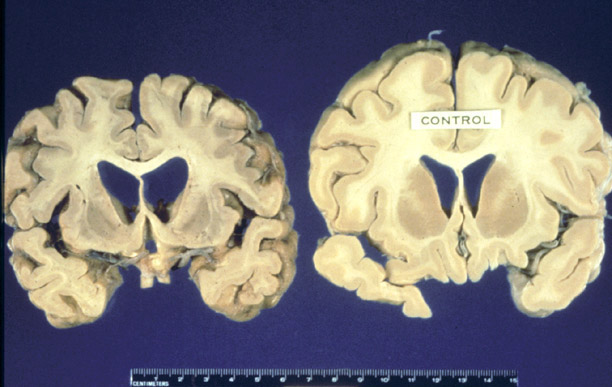 “Certainly with vCJD, which is the form of CJD associated with mad-cow disease, there is infectivity found in the blood and there have been four documented cases in the UK of vCJD from a blood donor who went on to get vCJD, so it can occur,” he said.

Speaking at a press conference, Professor Collinge added: “Certainly there are potential risks in dentistry where it is impacting on nervous tissue, such as root-canal treatments and special precautions are taken for that reason… If you are speculating whether A-beta seeds are transmitted at all by surgical instruments one would have to consider whether certain types of dental procedures might be relevant.”

But in a statement issued later, Dr Collinge clarified that more research was needed before any conclusions could be drawn about any potential risks in current medical or dental treatments.

“Our findings relate to the specific circumstance of cadaver-derived human growth hormone injections, a treatment that was discontinued many years ago,” he said.

“It is possible our findings might be relevant to some other medical or surgical procedures, but evaluating what risk, if any, there might be requires much further research. Our current data has no bearing on dental surgery and certainly does not argue that dentistry poses a risk of Alzheimer’s disease.”

Between 1958 and 1985 some 1,848 people in Britain, mostly children, received growth hormone injections made from tens of thousands of homogenised pituitary glands derived from the brains of human cadavers.

The NHS switched to synthetic growth hormone in 1985 when scientists realised that pituitary-derived hormone could be a route for transmitting CJD. Up to 2000, there were 38 known cases of “iatrogenic” CJD resulting from growth hormone injections in the UK, but this figure is likely to rise further because of the exceptionally long incubation period of the disease.

Of the seven patients who had the early signs of Alzheimer’s, four had severe deposits of amyloid-beta protein, three had moderate deposits and one had traces.

Dame Sally Davies, the Government’s Chief Medical Officer, played down the significance of the research yesterday saying that it was a small study on only eight samples.

“I can reassure people that the NHS has extremely stringent procedures in place to minimise infection risk from surgical equipment, and patients are very well protected,” she added.

John Hardy, professor of Neuroscience at UCL, said: “I think we can be relatively sure that it is possible to transmit amyloid pathology by the injection of human tissues which contain the amyloid of Alzheimer’s disease. Does it have implications for blood transfusions? Probably not, but this definitely deserves systematic epidemiological investigation.”

Doug Brown, director of research at the Alzheimer’s Society, said: “While these findings are interesting and warrant further investigation, there are too many unknowns in this small, observational study of eight brains to draw any conclusions about whether Alzheimer’s disease can be transmitted this way.

“Injections of growth hormone taken from human brains were stopped in the 1980s. There remains absolutely no evidence that Alzheimer’s disease is contagious or can be transmitted from person to person via any current medical procedures.”

What is a prion?
Alzheimer’s disease is now considered a “prion disease”. Prions, short for proteinaceous infectious particles, are misfolded proteins that carry the ability to trigger further proteins to misfold, leading to debilitating brain disorders, such as CJD in humans, BSE in cattle and scrapie in sheep. 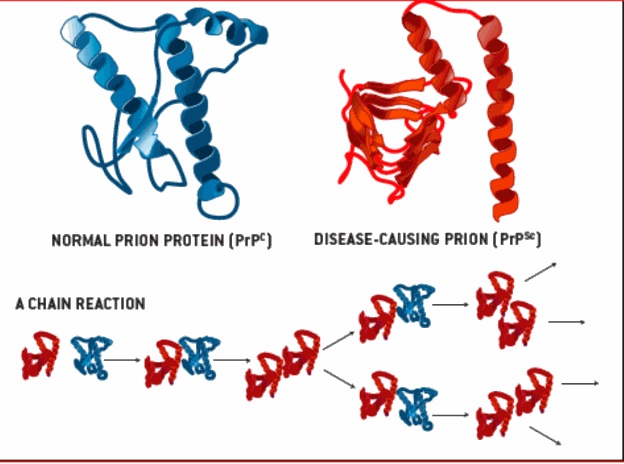 Prions are unique in being an infectious agent without any genes, unlike viruses or bacteria. They are extremely tenacious, sticking to metal surfaces of surgical instruments and surviving the high temperatures and chemical agents that kill off infectious viruses and microbes.

Stanley Prusiner, of the University of California, coined the word prion in the early 1980s and his pioneering work on them led to a Nobel Prize in 1997.
– The Independent