KUALA LUMPUR: Malaysian authorities on Sunday (Oct 4) ordered most of the country’s schools shut for two days because of possible health risks posed by the thick haze from Indonesian forest fires.

The education ministry said all schools, except a handful in outlying areas, must close their doors on Monday and Tuesday. 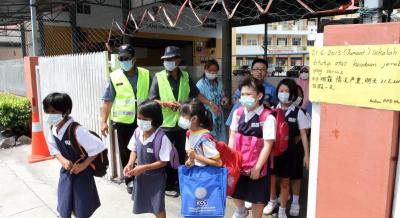 “The haze that is happening is beyond our control,” said Education Minister Mahdzir Khalid. “This issue has to be addressed wisely and quickly as it can do harm to our children. We will not compromise with anything that may bring harm to our children in schools.”

The persistent smog has afflicted large swathes of Southeast Asia for weeks, sparking health alerts, numerous school shutdowns and affecting flights. The pollution is on track to be the worst on record, surpassing the US$9 billion damage recorded in 1997.

Close to half of Malaysia’s 52 pollutant monitoring stations around the country registered “unhealthy” air quality on Sunday. Six stations, including one in Kuala Lumpur registered “very unhealthy” levels, with one area in the outskirts of the capital hovering close to the “hazardous” level.

While Malaysia, Singapore and large portions of Indonesia have for weeks choked on pungent smoke from forest fires on Sumatra Island, the Philippine island of Cebu also suffered its seventh straight day of haze on Saturday.

“We hope its commitment is not only on paper or mere statements pleasant to the ears, but through implementation which could end all haze problems,” he was quoted as saying by Bernama.

The worsening haze has also affected key sporting events in the region. Day one of the Singapore leg of the FINA World Championships – swimming’s World Cup – which included four-time US Olympic gold medallist Missy Franklin, was cancelled on Saturday.

One of Malaysia’s biggest marathons set for Sunday was also cancelled because of health fears for the 30,000 runners, and local football league matches have been shelved.