If you’ve ever had a stomach ulcer, you’ll know just how painful and uncomfortable it can be. According to Lisa Griffiths, a homeopath at The Round Clinic on Hong Kong Island, anyone suffering from a stomach ulcer will slowly experience progressively worsening symptoms of heartburn, acid reflux and burping, abdominal pain that is often burning, and changes in appetite and weight.

These symptoms may vary in intensity, and some may be worse than others, but almost all will be linked to the consumption of certain foods and liquids. It’s therefore common to find people with stomach ulcers avoiding certain foods – in particular, spicy foods – so as to not exacerbate the problem.

But spicy foods don’t cause stomach ulcers to develop, says Griffiths. In fact, they actually help the stomach lining because capsaicin – the active component of chilli peppers – has been proven to reduce stomach acid.

Spicy foods can, however, be quite rich. This can make an ulcer flare up because rich foods require more stomach acid to digest. “This increase in stomach acid attacks the already inflamed site of the ulceration, causing intense irritation of the stomach lining,” Griffiths explains. “It’s a bit like pouring vinegar on a cut – instant agony.” 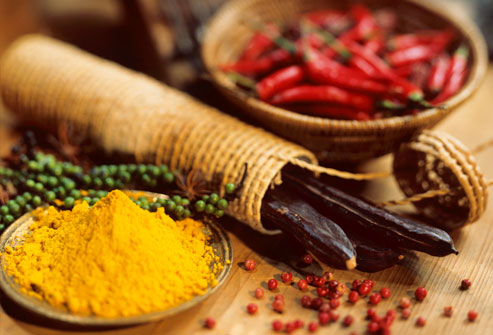 The main causes of stomach ulcers are Helicobacter pylori bacteria and the excessive use of non-steroidal anti-inflammatory drugs (NSAIDs). These can cause the interior lining of the digestive tract around the stomach to break down, creating open sores called ulcers. This interior lining is the stomach’s natural defence against the acid it produces to digest food.
“It has to be said that Helicobacter pylori bacteria are relatively common,” says Ines De Beer, an osteopath at The Round Clinic on Hong Kong Island. “The bacteria live in the stomach lining and an infection doesn’t necessarily cause symptoms, but in some people the bacteria can irritate the stomach lining, making it vulnerable to the stomach acid. The real reason why it affects some people and not others is not yet clear, but there’s a general consensus that lifestyle factors, such as stress, smoking and alcohol consumption, play a huge role.”

“So while spicy foods don’t cause stomach ulcers per se, they can certainly aggravate an existing condition if consumed in excess,” adds Griffiths. “If you suffer from this problem, you should get it investigated as soon as possible, rather than treat it on your own with antacids. You should never take antacids for an extended period, because they can lead to chronic kidney disease. They are fine for the occasional bout of heartburn, but if symptoms persist you should see your health practitioner to get your digestive health assessed.”

In addition to learning how to manage your stress and trying to achieve a balanced lifestyle, Griffiths recommends reducing, avoiding or eliminating all foods and substances that are likely to trigger uncomfortable reactions, such as cheese, rich foods, caffeine and alcohol, at least until the problem has been treated and your stomach lining has healed.

You should also increase your intake of foods like garlic, which can help keep levels of Helicobacter pylori in check; unprocessed honey, which kills harmful bacteria that can contribute to the development of ulcers; unripe bananas, which are thought to increase the production of mucous in the gastrointestinal tract, thereby forming a protective coating to help prevent and calm ulcers; and fermented foods, which supply good bacteria to the gut. – South China Morning Post/Sasha Gonzales