For anyone who needs extra motivation to get active, or just wants to make fitness more fun, wellness technology company Blue Goji this week announced the release of their Goji Play 2 fitness gaming system.

Wellness technology company Blue Goji has released Goji Play 2, designed to turn exercise into an exciting gaming session with its choice of 20 free downloadable games, helping you to work out while you play.

Unike other offers in fitness gaming, Goji Play 2 is not a mobile app for your smartphone, or a video game for your television, but an iOS and Android platform fitness gaming system that can be linked to a variety of cardio machines, turning a routine and repetitive cardio workout into a fun and exciting game.

It can be linked to several types of machines including bikes, treadmills, stair steppers, and ellipticals, meaning you can play at home or in the gym, and with two controllers and two foam batons users can work out together and play together. 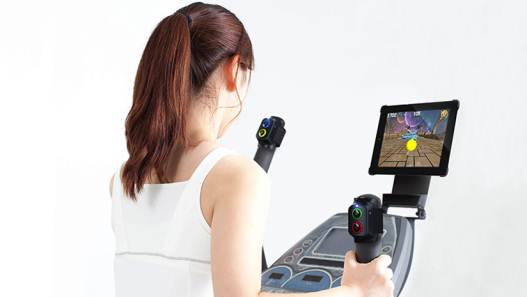 Users can download games from both the App Store and Google Play to link to their chosen cardio machine. With a choice of action, racing, puzzles, trivia, and arcade style games, users can choose according to their gaming preference and how intense they’d like the workout.

Goji Play 2 is available to purchase now at this link

The concept of combining fitness and gaming has been perhaps most popularized by Nintendo’s Wii with its range of games that can be played on their console device and linked with the television. The Wii Fit U now offers 19 new activities, making the total now over 70, a Fit Meter to track your progress and take on fitness challenges, and online Gym Communities so you can share progress with others. Selected activities can also be used without a television using just the balance board and GamePad.

Meanwhile other fitness gaming systems now available also include the MOVOBall, which allows users to work out on a Swiss ball while playing smartphone games or as part of an interactive game on the television screen. Users place the Swiss ball on the MOVOBall motion cradle which is then connected with a TV, smartphone, or Bluetooth device for an interactive workout that can be done alone or with family and friends.

The concept has also been extended to rehabilitation and physical therapy programs, such as in the case of BioGaming’s interactive rehabilitation platform. Using motion sensors, artificial intelligence, and learning systems enables patients to exercise as part of an interactive games, which not only makes the program more appealing, but also enables therapists to monitor performance remotely.
– AFP Relaxnews