Did you know that every minute, a child around the world died from Pneumococcal (PnD)? What is pneumococcal ? Pneumococcal disease is an infection caused by the Streptococcus pneumoniae (S. pneumoniae) bacterium, also known as pneumococcus. Infection can result in pneumonia, infection of the blood (bacteremia/sepsis), middle-ear infection (otitis media), or bacterial meningitis. 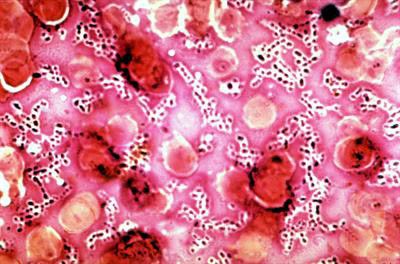 Even a brief look symptoms such as fever and cough lasting, but the attitude of parents who are slow to bring children to the hospital is a major cause of this disease becomes serious.Parents and the public must be educated about the dangers of a deadly disease.
PnD has been identified as a threats globally that killed more than one million children under the age of five years, particularly in developing countries.
It affects a child’s capacity to experience normal mental retardation, deafness, sluggish speech and paralysis.

More worrying is when it appears the bacteria Streptococcus pneumoniae (the cause PnD) has become resistant to antibiotics, thus making more difficult the management of this disease.

It is spread through the air, then the child should be given vaccinations against the disease in order to avoid repeated respiratory infections.
PnD includes a group of illnesses caused by bacteria Streptococcus pneumoniae, also known as Pneumococcus that can attack any part of the body manusia.Pneumococcus begins with invasion of upper respiratory tract and can spread by local invasion of blood vessels that cause various diseases.
In the case of untreated or treatment failure, the virus can cause hearing loss, learning disabilities, speech delays, cerebral palsy, mental retardation and sometimes death. However, it is difficult to diagnose PnD because the symptoms include fever, coughing, chest and cold vary by type of disease and not very specific.

Usually the diagnosis is made through verification rigorous tests such as X-rays and tests makmal.Namun, there are many factors that increase the risk of children suffering from PnD. Newborns up to age 24 months at greatest risk for PnD antibodies are relatively low.

Therefore, measures such as good hygiene practices at home and in child care centers are the most effective method to prevent this disease.