‘Oh no, pimples!’ No one loves pimples especially when they are spotted around your face. Your pores are basically openings in the skin that allow for two things: hair growth and secretion of sebum (a fancy word for oil) from sebaceous glands (oil glands). Occassionally, those clogged pores, just like clogged pipe which won’t allow the water to flow, clogged pores does not allow oil escape from inside your skin. That excess oil build up then triggers the rapid growth of bacteria called Propionebacterium acne (P.acne). it is a type of acne-bacteria that occurs naturally in our skin. We all have it, some of us more than others but when it grows rapidly, you get a pimple. 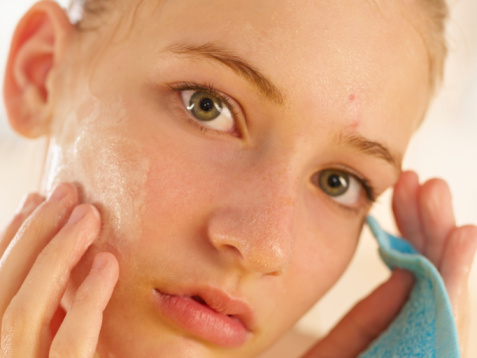 There a number of reasons that your pores might become clogged.

Have you ever squeezed your nose and sticky white stuff oozes through the pores? That stuff is actually a collection of dark skin cells mixed with a bit of oil. Dead skin cells typically get sloughed off and replaced by new ones. Sometimes that process gets slow down or interrupted, however. It maybe because you are not washing your face enough or because you have high level of insulin in your blood from eating too many sugary foods (high blood insulin linked to an increased of production of skin cells). Regardless of the reason, if too many dead skin cells hang around on the surface of your skin is too long, they will end up binding with sebum and clogging the pores.

Everybody regardless of gender has both male hormones (androgen) and female hormones (estrogen). But it’s androgen – which well known as testosterone – that stimulate the oil glands to produce extra oil and trigger the overproduction of skin cells, both of which lead to acne. During puberty, when your hormones basically turn you into a raging lunatic, the androgen in your body increase, which is one of the many reasons why almost of the teenagers – experience acne. A similar spike in androgens happen just before your menstrual period, which is also why 44 percents of women experience breakout associated with PMS. Even though men have higher level androgens in their blood – and therefore, more oil in their skin – they often struggle less with acne as adults because the amount of their androgens in their bodies does not fluctuate from month to month.

The more acne-causing bacteria in your skin the more likely you are to get breakouts. Productions of P.acnes increases during puberty. Many acne treatments, including benzoil peroxide and antibiotics, work in part by killng or reducing P.acnes bacteria.

So you have a clogged pore. Sometimes all that trapped oil and P.acne bacteria gets to be too much for the pore to hold, and it ruptures under the skin, sending that content into the surrounding tissue. White blood cells give reaction by causing redness, irritation, and pus. That’s when a clogged pore turns into inflammatory acne.

Contrary to a popular opinion, blackhead is not caused by dirt in the pores or bad hygiene. It occurs because of too much sebum get stuck in the pore. Instead, the pore enlarges, exposing all that oil to oxygen in the air. When that happens, fatty acids that occur naturally in sebum undergo chemical reaction called oxidation. So, scrubbing your face will not get rid of them, and it might lead to irritation and breakouts if you scrub too much.

Cleanse your face regularly and have a balanced diet so that you can slow down the production of pimples.