An Ohio couple, Bill Thistlethwaite and his wife Sarah has become a celebrity parents as their identical twins, born sharing the same amniotic sac and placenta has become viral. The twins making progress toward going home from the hospital.
The twin become popular as a photo showing the babies holding hands after birth May 9 at Akron General Medical Center viral on the net. 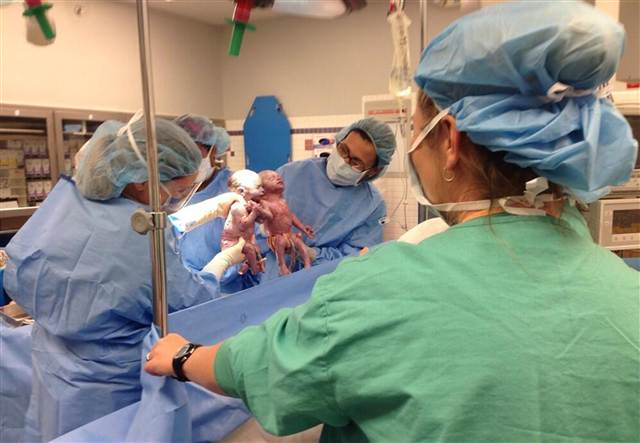 The babies, both girls are taking full bottles and have gained weight each now at 5 pounds or more. This rare birth condition is called monoamniotic or ‘mono mono’ and it occur in about one of every 10,000 pregnancies. The girl name Jenna was born first at 4 pounds, 2 ounces and 17 inches while Jillian following 48 seconds later at 3 pounds, 13 ounces and 17.5 inches.
They were born at 33 weeks and two days from their 32 year old mother, a middle school math teacher.

They were moved to Akron Children’s Hospital after birth because they needed breathing assistance. They are on track to be home in another week or two if the condition continue good.
– Associated Press

What are Mono Twins ?