Understanding your child can be hard when you’re a parent. Because you have more life experience and you’re older than your toddler or older child, it can be difficult to put their reality into perspective. Their decision-making receptors are barely formed, and they don’t fully understand concepts like consequence and cause and effect.

Knowing a little bit of child psychology can be extremely eye-opening as a parent. You may not completely remember how it feels to be a child and misunderstood, so the more you absorb about child psychology, the better you can communicate with your son(s) or daughter(s). 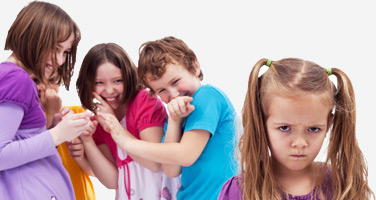 The good news is that while child psychology may be complicated enough to require hard and extensive degrees to fully understand it, a lot of research and simple psychology concepts are available to you online. Basic child psychology is a mix of common sense and insight into the perspective of a child, as well as how the world around them shapes how they grow.

You may remember your parents yelling at you in the past for sitting too close to the television or watching too much TV in general. You probably know and regurgitate the same sentiments now that you have your own children. You’ll ruin your eyes, you’ll rot your mind, go play outside – if it sounds cliché, it’s because it’s true.

However, there is a lot of scientific data to backup this sentiment. Many parents believe that letting their children watch educational television at an early age is healthy, and this can be the case in small doses, but overall it’s not a wise idea. The University of Montreal conducted research on 2,000 young children after watching varying amounts of television. It was found that the more TV a child watched, the worse their math and motor skills became. As this trend continues, the behaviors only become more depleted.

If you’re looking to keep your child active, then you’re doing your job as a parent. However, many children are also becoming couch potatoes at an early age. While some of these children are able to succeed academically later in life, researchers at the University of Dundee found a link between being physically active as a child and improved brain function.

Don’t be so Overprotective

It’s likely you’re very watchful of your child. At a young age, this ever-present eye is very useful. As children grow, however, they have to be able to perform tasks on their own and be given a taste of independence in small ways. Whether it’s pouring their first cup of juice or walking home alone for the first time, this independence is important for adult development.

University of Mary Washington students also discovered that an overprotective parent can create stressed and depressed environments for both the mother and child. After analyzing the parenting style of almost 200 women with children below the age of five, the researchers found that the more overprotective a parent was, the more likely they were to be emotionally strained and dissatisfied with life. This kind of emotional environment can also affect the children in the home.

There are many different forms of parenting, from letting children do their own thing in a free-range style, or being a strict disciplinarian. You are free to choose your own parenting style as long as it isn’t abusive, but researchers have found that strict discipline styles often do more harm than good.

With about 90% of American parents admitting to being verbally harsh with their children (yelling, swearing, belittling, etc.) at least once, it’s important to know the repercussions of these actions. Study author Ming-Te Wang found that of 967 American families with 13-year-old children, those parents who used harsh words with their children experienced more discipline problem within a year.

If you’re a parent with more than one child, you probably noticed that your children are pretty different. When you watch television and see a sitcom with the introverted brainiac child and the social butterfly child who are constantly at odds, the reality isn’t so different from what you’re seeing on TV. A 1987 study discovered that siblings have personalities that are no more alike than unrelated, random strangers.

Despite having a genetic code that is potentially 50% identical and living in similar environments, the subtle differences in how they are raised help mold their personality. If you treat your first born differently than your second child, this has a direct impact on their personality. Other factors include their age ranking in the household, the time period in which they grow up and the friends they have. This can make parenting difficult since each child requires individualized attention and interaction based on their personality.