Noni juice or Morinda citrifolia is a tree from coffee family, Rubiaceae. It has different names from different countries such as nunaakai (India), apatot (Phillipine), kumudu (Bali), kadar (Java), and noni (Hawaii).

Even though pure noni juice have foul smelling fad or some others called it vomit-fruit juice, their numerous benefits will beat you down. 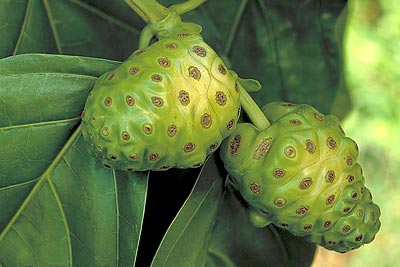 Noni fruit can act as a tranquilizer and stabilize people’s feeling and condition. Planta Medicine journal had stated that a group of researchers led by Younos from France reported that noni extraction had act as a tranquilizer which gives effect to rats. The strength of the extraction are equal to 70% of morphine itself. Furthermore, it is free from any additives and side effects. This fact has supported by research from Henan Medical University in collaboration with Medical College University of Illinois led by Wang Mian Ying.

Other than that, ethanol noni extraction can reduce body blood pressure. It is proved by researchers led by Moorthy in his journal entitled Pleminary Phytochemical and Pharmacological Study of Morinda Citrifolia.

Mycobacterium tuberculosis is a bacterial pathogen causes to hacking cough or tuberculosis. Research from Phillipines led by Saludes in International Chemical Congress of the Pacific Basin Societies Meeting showed that noni extraction can kill 89% of bacteria in a test tube and it has similar effectiveness of antibiotics given to tuberculosis patients, i.e. Rifampin which is can kill almost 97% of bacteria in a test tube with similar concentration level of noni extraction.

However, mixed DNA formation can be prevented by human body enzyme itself. Oxidative pressure is the main cause of cancer. Antioxidants needed to balance free radicals in your body as well as reduce the cancer risks. So, the best way to avoid cancer is by maximize your body immune system and increase antioxidant supplement intake.

Noni juice is rich with antioxidant which can prevent cancer by scavenging reactive oxygen free radical and lipid peroxides. A research was held by measuring the noni’s ability to absorb superoxide anion radical (SAR) and lipid peroxide (LPO). Results shown that noni have the major driving force for SAR scavenging activity in about 2.8 times more than vitamin C, 1.4 times more than picnogenol, and 1.1 times than grape seed powder. It is proved that noni have a big potential to fight for oxygen free radicals.

hence, noni fruit have so many benefits for human health and grab attention to many big pharmaceutical company. Further studies are needed if there is any side effect comes from noni fruits for long term consumption.