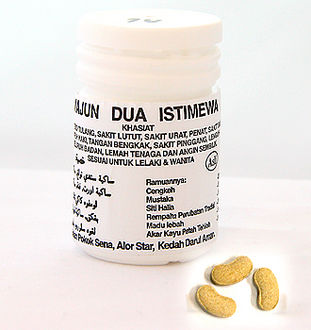 The Health Ministry’s Pharmaceutical services senior director Datuk Eisah Abdul Rahman said tests carried out by the ministry on the three traditional medicine found ‘dexamethasone’ among its contents, a product that can cause liver and kidney problems if not consumed without advise from doctors.

“A patient has died due to kidney complications after consuming ‘Majun Dua Istimewa’ products for two months, purportedly as a pain relief,” she said in a statement, here yesterday.

Esah said ‘dexamethasone’ which is controlled under the Sale of Drugs Act 1952, is a potent anti-inflammatory drug often used to treat allergy and must only be consumed upon a doctor’s prescription.
She said the named traditional medicines were still being sold despite raids carried out by the Health Ministry’s enforcement division.
Meanwhile, ‘Figure-Up’ contains sibutramine which is used to reduce weight, especially by obesity patients.
Esah said medicine or products containing sibutramine were banned in Malaysia since June 23, due to risks posed by the product. — Bernama

Beware the medicine that could turn out to be poison