TUESDAY, May 15, 2018 (HealthDay News) — The type of colon polyp that’s spotted during a colonoscopy may help predict the likelihood of colon cancer, new research shows.

These polyps — also called adenomas — can be labeled advanced or non-advanced, explained researchers at the University of Pittsburgh School of Medicine.

Their study of almost 16,000 patients who underwent colonoscopy found that the long-term risk for colon cancer was 2.5 times greater for those with advanced polyps, compared to people without such growths.

On the other hand, non-advanced polyps did not increase the likelihood of developing the disease. These patients had the same risk as those who didn’t have polyps, the investigators found.

“That’s a provocative finding,” said study lead researcher Dr. Robert Schoen. “It would suggest that if you have a polyp that is non-advanced, which is the case in about one-third of people undergoing screening, you don’t need to come back as frequently for colonoscopy because your risk of cancer is the same as if you didn’t have any polyps.”

Schoen is a professor of medicine and epidemiology at the university. The study was funded by the U.S. National Institutes of Health. 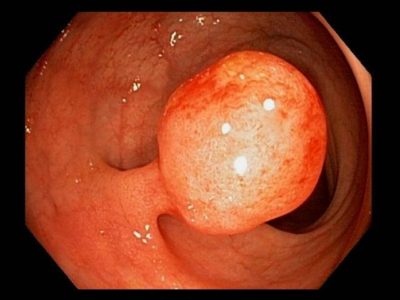 Colonoscopies can spot early cancers and in many cases can even prevent the disease as doctors remove potentially harmful polyps.

“One can actually prevent people from getting cancer, which is far better than just detecting it early,” Schoen said. “But polyps are commonly found, and patients can find themselves returning for frequent follow-up colonoscopy procedures.”

To find out if the type of colon polyp influences a patient’s prognosis, Schoen’s group tracked 15-year outcomes for 15,900 people who underwent a colonoscopy as part of a major U.S. cancer screening trial.

When the study began, colonoscopies revealed that 18 percent of patients had an advanced polyp, 32 percent had a non-advanced polyp, and 50 percent did not have any pre-cancerous polyps.

The study, published May 15 in the Journal of the American Medical Association, found that those with advanced polyps had a higher risk for colon cancer for the duration of the study.

“After an advanced polyp has been removed, the whole colon remains at risk for cancer, and periodic colonoscopy is needed,” Schoen said.

But people with non-advanced polyps had the same long-term risk for cancer as those without polyps.

Schoen noted that, in the United States, people with one or two non-advanced polyps are typically advised to return for a repeat screening in five to 10 years.

The new study questions whether that might be necessary.

“Bringing everyone back at five years is incurring a lot of testing that may not be preventing much cancer because only a small fraction of polyps will ever turn into cancer,” Schoen said. “Millions of people are receiving follow-up colonoscopy exams for non-advanced polyps. We need to find out what is necessary. Potentially, this is an area where we could reduce testing and costs.”

Dr. David Weinberg is chair of the department of medicine at Fox Chase Cancer Center in Philadelphia. Looking over the new findings, he stressed that most people will never develop advanced colon polyps.

Weinberg agreed that the new findings question the wisdom of routine 5-year follow-up colonoscopies for people with low-grade polyps versus advanced growths.

“Colonoscopy is a relatively finite resource, even in the United States,” he said. “Given the higher risk over time in patients with advanced adenomatous polyps, particular efforts should be devoted to making sure that these patients are regularly followed to identify colon polyps and remove them.”