What is Systemic lupus erythematosus (SLE)

SLE is a disease that leads to long term (chronic) inflammation ( MedlinePlus ). 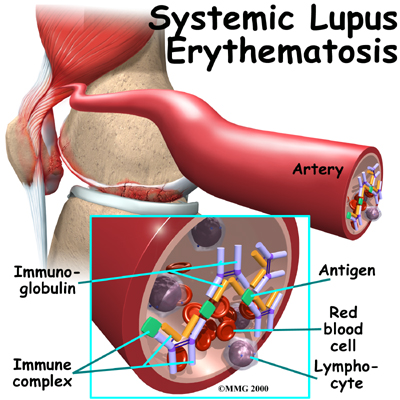 It is an autoimmune disease characterized by acute and chronic inflammation of various tissues of the body. Autoimmune diseases are illnesses that occur when the body’s tissues are attacked by its own immune system. The immune system is a complex system within the body that is designed to fight infectious agents, such as bacteria and other foreign microbes. One of the ways that the immune system fights infections is by producing antibodies that bind to the microbes. People with lupus produce abnormal antibodies in their blood that target tissues within their own body rather than foreign infectious agents. These antibodies are referred to as autoantibodies. ( Medicine Net)
SLE is most common in women and the majority develop the condition between 15-45 years.

The most common symptoms of SLE are :

The American College of Rheumatology (ACR) has develop a classification system to help identify patients with lupus. The criteria include: malar rash, discoid rash, photosensitivity, oral ulcers, arthritis, serositis (pleuritis or pericarditis), renal disorder, neurological disorder (seizures or psychosis), hematological disorder, immunologic disorder and antinuclear antibodies. A diagnosis of lupus is made when at least four of the above criteria are present, either serially or simultaneously, during any interval of observation. (UCB

Unfortunately, over time, SLE can damage or cause complications in systems throughout your body. Possible complications may include blood clots, inflammation of the heart, stroke, and lung damage. SLE can have serious negative effects on your body during pregnancy, and can lead to pregnancy complications and even miscarriage. Talk with your doctor about ways to reduce the risk of complications.
(Healthline)