New Spanish research (July 2018) has found that eating your evening meal earlier, or leaving an interval of at least two hours before going to bed, is linked with a lower risk of breast and prostate cancer.

Carried out by the Barcelona Institute for Global Health (ISGlobal), a centre supported by the la Caixa Banking Foundation, the new study looked at 621 patients with prostate cancer and 1,205 with breast cancer, as well as 872 male and 1,321 female control participants, to see if the timing of meals was associated with risk of the two cancers. 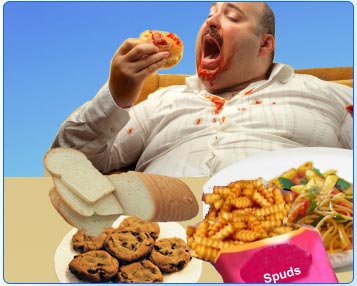 The researchers interviewed the participants on timing of meals, sleep, and chronotype, which is whether an individual shows a natural preference for morning or evening activity.

Participants were also asked to complete a Food Frequency Questionnaire to look at their dietary habits and adherence to cancer prevention recommendations.

The results showed that participants who waited two or more hours after dinner before sleeping had around a 20% lower risk of breast or prostate cancer, compared with subjects who slept immediately after.

Eating dinner before 9pm also had a similar protective effect when compared with eating the evening meal after 10pm.

The positive effect of leaving a longer interval between dinner and sleep was also more pronounced among participants who adhered to cancer prevention recommendations and in those who were morning types.

The study is the first to analyse the association between cancer risk and the timing of meals and sleep, with previous research focusing instead on dietary patterns – for example, the effects of eating red meat, fruit and vegetables, and the associations between food intake and obesity, rather than the timing of food.

“Our study concludes that adherence to diurnal eating patterns is associated with a lower risk of cancer,” commented lead author Manolis Kogevinas, adding that the findings “highlight the importance of assessing circadian rhythms in studies on diet and cancer”.

Dora Romaguera, the last author of the study, also noted that, “Further research in humans is needed in order to understand the reasons behind these findings, but everything seems to indicate that the timing of sleep affects our capacity to metabolise food.”

Animal experimental evidence has shown that the timing of food intake has “profound implications for food metabolism and health”.

If the findings are confirmed, Kogevinas added that, “They will have implications for cancer prevention recommendations, which currently do not take meal timing into account.

”The impact could be especially important in cultures such as those of southern Europe, where people have supper late.”

The results can be found published online in the International Journal of Cancer. – AFP Relaxnews