Do you like to eat fish? Fish is generally a healthy protein choice, lower in saturated fat, total fat and calories. It is more portion than meat or poultry.
Some fish particularly fatty, cold water fish such as salmon, mackerel and herring are high in omega-3 fatty accids, a type of fat that helps make your blood less likely to form clots that may cause heart attacks.
Anchovies, sardines and lake trout are other good sources of omega-3 fatty acids especially for those at risk of heart disease. Eating omega-3 fatty acid outweighs potential risks. 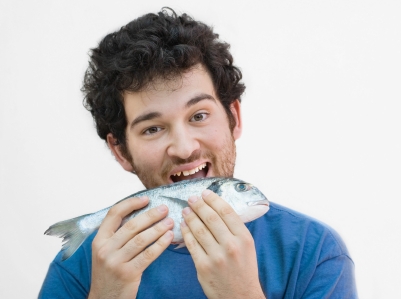 Due to industrial pollution there are some risks for a buildup of contaminants in our body. The primary contaminant is mercury that could accumulates in waterways and shows up in fish as the highly toxic methyl mercury. If you eat fish that contains methyl mercury, the toxin can accumulate and remain in your body for up to a year.
Fish may also contain other contaminants due to pollution.

| FISH OIL FOR YOUR HEALTH |

The amount of mercury ingested from fish is not a health concern. However, even small amounts of mercury may be harmful to developing fetuses, babies and young children. Pregnant women, nursing mothers and children age 5 and younger should avoid fish with he highest mercury levels : tile fish, swordfish, king mackerel and shark. They should limit fish intake to no more than 12 ounces a week of fish and shellfish that contains low levels of mercury.
These choices include shrimp, salmon, pollock, catfish and canned light tuna. Albacore or ‘white’ tuna is higher in mercury than canned light tuna.

Eating a variety of fish is recommended to reduce the potentially negative effects of environmental pollutants. When possible, select fish that are not farm raised. Farm-raised fish tend to have more fat and calories and slightly less protein. They also may have higher levels of contaminants due to toxins in their feed.
Source :- Medical News Today