Radiology is a specialized branch of medicine which helps in diagnosing and even treating the patients suffering from various ailments. It is basically various forms of imaging techniques that are employed to detect internal abnormalities in a patient’s body. 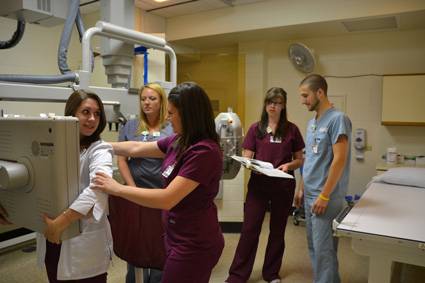 This branch of medicine is getting much importance with the passing days in view of the many scientific innovations that are taking place in the field. There are many reputed institutions that are imparting knowledge and training on radiology at their schools site.

It all started with the invention of X-ray by Wilhelm Conrad Rontgen which was found to penetrate through all tissues barring bones. This mode of imaging was named roentgen graph after the name of the inventor of x ray or popularly as radiography.

In the first fifty years of the history of radiology, the imaging was solely dependent on radiography only. Still now this remains the first choice of doctors for diagnosis of ailments of lungs, bones/skeletons or of heart problems considering the wide availability of such devices, ease and swiftness of getting the images and its comparatively low level of cost. The students are trained in radiography techniques early at schools site.

X rays are produced in a specially devised machine from X- ray tubes which is then directed to the specific parts of the body to be imaged by expert technicians, who are known as radiographers. The common images in X ray techniques are produced in a film, which is impregnated with silver, this being the original practice too.

A cassette which is secured from light is used having a screen composed of light- emitting- phosphors. One undeveloped new film is kept tight to the screen. The X- ray passing through the patient falls on the film which is then sent for development by treating with chemicals. Many schools sites nowadays are using digital radiography, which is an improved version of radiography. In digital radiography, the X- ray, after passing through the patient, falls on sensors. The sensors are designed to convert the X- ray signals into digital data or information which appears on the screen of a computer.

A new application of X- ray technique has been developed to monitor and image running information of systems inside human body. This is named as Flouroscopy. Angiography also uses the similar technology. It employs a closed circuit TV to which fluorescent-screen along with an image-intensifier-tube is connected. With this system, the radiologists in the making are able to see the intended parts of the body in motion as a live system at schools site.

Sometimes in order to get a clear view of the image, some sorts of radio-contrast chemical agents are used, which are given to the patients orally or through injection. There are two radio-contrasts that are used namely barium ( barium sulphate) and iodine. Barium is administered orally or rectally for seeing gastrointestinal tract or GI tract for any abnormality.

Iodine is a radio-contrast agent that has the ability to absorb X rays strongly thereby producing more clear images which helps in seeing and monitoring the dynamic system in GI tract or blood flows in veins or in arteries. The use of iodine as a radio-contrast agent has been found to be very useful in detecting abnormalities like tumors or cysts. The students can learn the use of these improved diagnostic techniques at their schools sites.

CT Scan – Another mode of radiography:

CT scan is another method of radiography which has been developed by modern science using the X- ray, which has proved to be a boon to the patients suffering from many critical ailments. This method uses X- ray by incorporating the computing algorithm for getting the image of the affected parts or systems. In CT scan a ring shaped device is made to rotate around the patient that leads to produce tomograms which are cross-sectional-images that are produced with the help of computers. Use of radio-contrast agents is almost a regular practice to get a clearer image in CT scan, though in some instances CT scan is also done without the use of radio-contrast agents. The students of radiology can only have an opportunity to get the training at schools site if the school is attached to a regular hospital.

The CT scan can provide much delicate details of the affected part in a short period of time. With the advent of CT scan diagnostic accuracy has increased manifold.