CONAKRY (Reuters) – An outbreak of hemorrhagic fever has killed at least 23 people in Guinea’s southeastern forest region since February when the first case was reported, health authorities in the West African nation said on Wednesday.

At least 35 cases have been recorded by local health officials, said Sakoba Keita, the doctor in charge of the prevention of epidemics in Guinea’s Health Ministry. 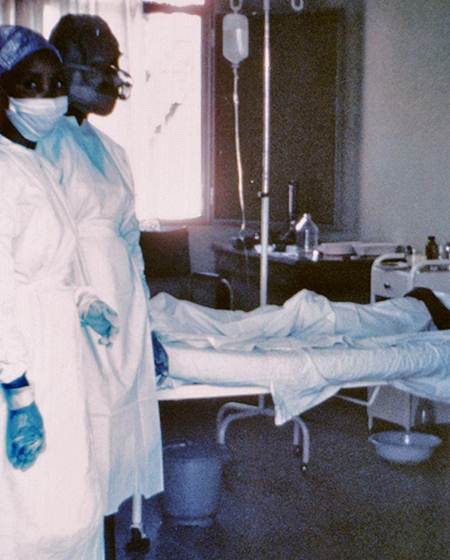 “We thought it was Lassa fever or another form of cholera but this disease seems to strike like lightning. We are looking at all possibilities, including Ebola, because bushmeat is consumed in that region and Guinea is in the Ebola belt,” he said. No cases of the highly contagious Ebola fever have ever been recorded in the country.

Keita said most of the victims had been in contact with the deceased or had handled the bodies. He said those infected had been isolated and samples had been sent to Senegal and France for further tests.

More than half of the mineral-rich nation’s 11.4 million people live on less than $1 a day and many lack access to basic medical facilities and qualified medical staff.

What is Hemorrhagic Fever

Viral hemorrhagic fevers (VHFs) are a group of illnesses caused by four families of viruses. These include the Ebola and Marburg, Lassa fever, and yellow fever viruses. VHFs have common features: they affect many organs, they damage the blood vessels, and they affect the body’s ability to regulate itself. Some VHFs cause mild disease, but some, like Ebola or Marburg, cause severe disease and death.

VHFs are found around the world. Specific diseases are usually limited to areas where the animals that carry them live. For example, Lassa fever is limited to rural areas of West Africa where rats and mice carry the virus.

The risk for travelers is low, but you should avoid visiting areas where there are disease outbreaks. Because there are no effective treatments for some of these viral infections, there is concern about their use in bioterrorism.
Centers for Disease Control and Prevention