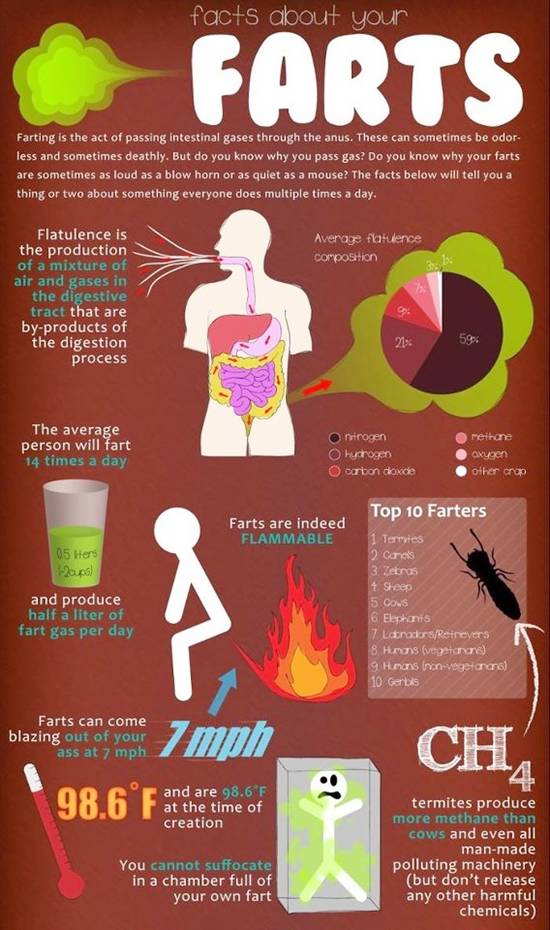 Hm.. I think maybe we need to find other’s fact about farts.
Where does fart gas come from ?

What is fart gas made of ?

Fart gas is highly variable and most of the air we swallow is absorbed by the body before the gas gets into the intestines. By the time the air reaches the large intestine, most of what is left is nitrogen. Chemical reactions between stomach acid and intestinal fluids may produce carbon dioxide which is also a component of air and a product of bacterial action.
Bacteria also produce hydrogen and methane. It depends on several factors ; what we ate, how much air we swallowed, what kinds of bacteria we have in our intestines and how long we hold in the fart.
The longer a fart is held in the larger the proportion of inert nitrogen it contains, because the other gases tend to be absorbed into the bloodstream through the walls of the intestine.
A nervous person who swallows a lot of air and who moves stuff through his digestive system rapidly may have a lot of oxygen in his farts because his body didn’t have tine to absord the oxygen.

Farts stink because the odor of farts comes from small amounts of hydrogen sulfide gas and mercaptans in the mixture. These compounds contain sulfur. The more sulfur in your diet more your farts will stink. Food such as cauliflower, eggs and meat are notorius for producing smelly farts, whereas beans produce large amounts of not particularly stinky farts.

How much gas does a normal person pass per day ?

On average, a person produces about half a liter of fart gas per day, distributed over an average of about fourteen daily farts. Whereas it may be difficult for you to determine your daily flatus volume, you can certainly keep track of your daily numerical fart count.