The research in New York shown that too little sleep for our kids may lead changes in appetite and diet. From their experiment, kids ate less and weighed less when they went to sleep earlier than usual compared to when their bedtimes were pushed back.
The study is based on 37 kids ages eight to 11 and lasted just three weeks. Chantelle N. Hart, the researcher from the Center for Obesity Research and Education at Temple University in Philadelphia said

“This is a small and brief study and the first experimental study that we are aware of with school-age children,”
“Additional studies need to be conducted prior to stating with certainty that sleeping more means eating less for kids,” 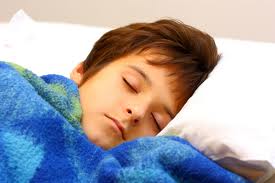 According to the National Sleep Foundation, the first week of the team’s study kids slept as usual about nine and a half hours per night on most nights. That’s below the recommended 10 to 11 hours for school aged children. The researchers split the kids into two randomly-selected groups. One group went to sleep one and a half hours earlier and other group went to bed one and a half hours later. For the third week, the groups swapped routines. During their week of extra sleep, kids ate an average of 134 fewer calories per day than during their shortened sleep week.
They also weighed about half a pound less during the week they slept more.

It will be important to do this study again with more kids over a longer period of time to see if the results are the same. Researchers also need to figure out the best way to help kids sleep longer. A good night’s sleep has been associated with a number of benefits for children across domains of functioning including improvements in memory, learning and mood and decreased behavioural difficulties.