NEW YORK, Sept 27 (Bernama) — Malaysia’s Permata Kurnia, a programme of early intervention for autistic children and their families, is to collaborate with Autism Speaks, the world’s leading autism science, awareness and advocacy organisation based in New York City.

The cooperation is anticipated to help in educating the public and enhancing the sensitivity of the community towards supporting the needs of individuals with autism as well as the needs of their families. 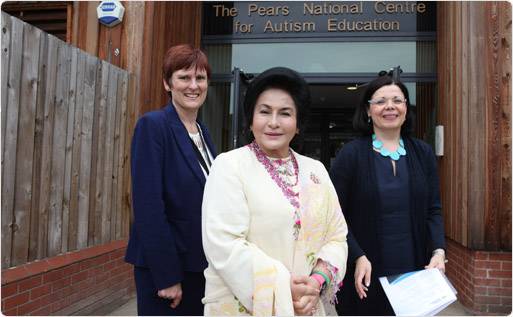 A Permata Kurnia centre for about 100 children with autism is scheduled to be opened in 2015 in Kuala Lumpur.

“We presented our plans, approach and potential programme to ensure that they were in accordance with international standards,” Rosmah told Bernama and Radio Television Malaysia (RTM) after attending The Sixth Annual World Focus on Autism, here, Thursday.

Rosmah was one of the guest speakers at the event.

Autism Speaks was founded by Suzanne and Bob Wright, the grandparents of a child with autism, in February 2005. Bob Wright is a former vice-chairman of General Electric and chief executive officer of NBC and NBC Universal.

Since its inception, Autism Speaks has committed more than US$200 million (RM645 million) to research and developing innovative resources for families.

On the global front, Autism Speaks has established partnerships and related activities in more than 40 countries on five continents to foster international research, services and awareness.

Rosmah said Autism Speaks had ventured into several countries in South America and Asia but not yet to Malaysia.

“So, we were delighted when they expressed their interest to forge cooperation and realise the setting up of an autism centre in Malaysia. They also agreed to attend the international conference on autism to be organised by Malaysia in April next year, and to help select speakers and come up with the topics to be discussed,” she said.

Earlier, in her speech, Rosmah enlightened the audience about the Permata Kurnia autism centre to be built in Kuala Lumpur, also saying that the architect who designed the centre was a mother of a child with autism.

Rosmah also attended the Fashion 4 Development (F4D) annual luncheon of first ladies, diplomats, fashion industry leaders and key influencers from around the globe at a hotel here, the event coinciding with the 68th session of the United Nations General Assembly.

The luncheon, hosted by F4D president and founder Evie Evangelou, is to show recognition for and celebrate the unprecedented cooperation between diplomacy and fashion for the greater good of women and children worldwide.

Several fashion designers, including Malaysia’s Zang Toi, presented their creations at a show during the luncheon.