As we know, popular actor, Robin Williams has commit suicide. It is surprise as he is such a funny and rich guy. Why do people commit suicide ?
Suicide occurs much more commonly than we think. Most sucide prevention are targets at teenagers but in recent years, there has been increased suicides for middle aged men. 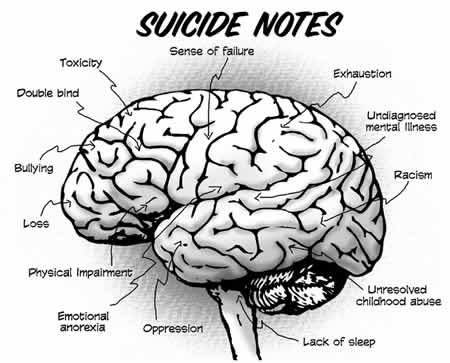 Men are more risk than women -on average, more men commit suicide than wome.
According to Psychology Today, these are some interesting facts about suicide :

– Five million people in America have attempted suicide. Every 17 minutes, one of them succedds.
– Suicide is the scond leading cause of death among college students.
– Only 15% of people who have clinical depression commit suicide.
– When you use a gun to commit suicide, you are more likely to succedd as 90% of suicide attempts made with a gun are successful compared to only 10% of suicides made without a gun.
– 80% of people who successfully commited suicide have given clear warnings of their intention to commit suicide to other people.
– Divorced men are 10 times more likely to commit suicide than divorced women.
– One out of three successful suicides have made at least one previous attempt to commit suicide.
– The Nanjing Yangtze River Bridge is the most popular suicide site in the world followed by the Golden Gate Bridge in San Fransico.

A suicidal person is rarely absolutely determined to die. Remind them of why you want them to live and speak to the part of them which still has something to live for.