Physicians call it the 5,000-hour problem. If you have a common chronic condition such as cardiovascular disease or diabetes, the expert in charge of your health for almost all of your 5,000 waking hours annually is—you. And, frankly, you won’t always make the best choices.

“The behavior changes that are necessary to address chronic disease are much more in your hands than in the doctor’s,” points out Stacey Chang, executive director of the Design Institute for Health at Dell Medical School in Austin, Texas. “To cede that control to the doctor sometimes is actually counterproductive.”

With that in mind, a rapidly evolving set of new digital health tools is angling to help patients engage better with their own care. Wearable health monitors already on the market help to track heart rate, footsteps, or blood glucose levels; sophisticated home health sensors can report on weight and blood pressure; and phone apps can present key feedback and maybe even offer personalized advice.

The only problem: It has thus far proved very difficult to know what really works.

Indeed, despite a veritable avalanche of “digital health” products, from Fitbits to telehealth heart sensors, and despite floods of data flowing both to the people who use them and to their physicians—and even despite clear evidence that many doctors very much want these new gadgets to work—there is still precious little clinical data proving that they are providing major patient benefits or delivering more cost-effective care. 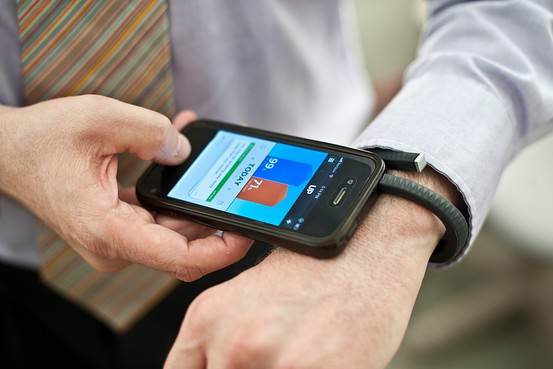 As with everything else in health care, the reasons for this gap are many, but one major factor is the difficulty of getting patients to embrace new forms of self-monitoring and self-care beyond the novelty period—and to a point where such technology might actually make a difference.

Many early attempts to truly test the efficacy of such digital technologies have shown them to be a flop in clinical trials—in large part because participants drop out. An analysis of five health apps built with Apple iPhone software, for example, found that only about one-eighth of participants, or less, were still hanging in after 10 weeks. Another recent study out of Singapore found that about 200 people outfitted with fitness trackers showed no better health outcomes than a similar control group after a year. And when Cedars-Sinai Medical Center in Los Angeles invited about 66,000 patients registered on its portal to share data from their fitness trackers, less than 1 percent did so, according to a paper published last year in the journal PLOS One, part of the open-access Public Library of Science.

“If you build it,” quipped Brennan Spiegel, an internal-medicine physician and head of the Cedars-Sinai Center for Outcomes Research and Education, “they will not come.”

|Mobile phone health apps: how useful are they really?|

That’s not entirely surprising, according to Kevin Volpp, director of the University of Pennsylvania’s Center for Health Incentives and Behavioral Economics. “Studies that have looked at ongoing engagement with devices have found that basically people stop using devices that are given to them over time,” he said. “That’s one of the central challenges in efforts to improve health through technology and digital devices. While there have been enormous advances in technology, there’s still a lot of work to be done with the science of habit formation.”

Some clinicians hope that simply doing a better job of educating patients on these new technologies—and on their personal role in using them to improve their own health—can help bridge this gap, but others suggest that won’t be enough. “It’s not a very potent way of changing behavior,” said David Asch, executive director of the University of Pennsylvania Perelman School of Medicine’s Center for Health Care Innovation. Most people on a diet, after all, know what they shouldn’t eat.

One example is a “digital therapeutics” service from Omada Health of San Francisco that targets people at high risk of developing cardiovascular disease or diabetes. In one study, among 1,121 overweight or obese seniors, participants averaged a 6.8 percent reduction in body weight within 26 weeks, and 89 percent of them completed 9 of 16 core lessons—high marks of achievement in this field.

“It’s a very high-tech and high-touch program,” said Sean Duffy, Omada’s co-founder and chief executive. “We mail people a welcome kit that contains a digital scale that has a cellphone chip in it so it’s preregistered to you as a participant. You step on the scale, there’s a beep and the data is in the system.” The system also forms patient-support groups based on location and demographics, and those groups are then paired with health coaches. With patient data flowing continually to Omada, the health coaches can be alerted if someone starts backsliding.

That flow of patient data also allows the service to act as a continuous learning system, with the company’s data scientists studying ways to optimize and personalize interventions to improve behaviors, Duffy added.

Traditionally, hospitals saddle patients with a pile of discharge-instruction papers just before they are wheeled down to their cars—“when they couldn’t care less about what we’re giving them,” said Francoise Marvel, an internal medicine physician at Bayview. That failure to communicate can add to patients’ confusion about how to care for themselves during the crucial early days of recovery—one main reason that about a fifth of heart attack patients nationally are rehospitalized within a month after discharge.

The Johns Hopkins “Corrie” app aims to address that by integrating educational videos, medication information, medical appointment tracking, and other crucial aids in an easy-to-use mobile app. Marvel says that early results from a first clinical study of 50 patients have been promising: None were rehospitalized in the first month.
The Corrie app taps not only smartphones and smartwatches, but smart timing. “We can actually enroll patients who are six or seven hours out of having a stent placed in the ICU,” Marvel said. “We’re giving it to patients when they have the time to spend watching the videos, asking questions about their medications, and following their blood pressure and their vital signs—which they will likely need to be taking when they go home. “We’re getting them to buy in and learn the skills,” she added, “while they care the most.”

Family members can also follow along with a companion Corrie app. “If the adult daughter knows that her dad’s not taking his blood pressure medicine every day,” Marvel said, “she’ll rain down on him in a way that no doctor or no nurse follow-up call could ever compete with.”

Still, for all the enthusiasm surrounding these technologies, limited independent real-world testing makes it difficult to categorically say what works and what doesn’t—though researchers do suggest that one thing is abundantly clear: Patient acceptance of high-tech self-care and monitoring devices cannot be taken for granted.

“We have to think about how we intervene on behaviors in really different ways, ones that are much more consumer-like,” said Chang. Social networks such as Facebook, for instance, can provide much more pervasive, much more consistent touchpoints than traditional health-care practices and can shift behaviors in striking ways, he says.

In chronic disease, people lack instant gratification for, say, dropping that slice of pizza and eating their damn broccoli. Individual patients need to find personally meaningful ways to motivate themselves, like picturing themselves playing actively with their grandchildren, Chang said. A trained human health coach can help them build this motivational framework, but it remains a real challenge for a mobile app.

Research in behavioral economics can help to optimize more concrete healthy-habit incentives offered by employers or health plans, Volpp said. A clinical study published last year in the Annals of Internal Medicine, for example, either paid participants $1.40 for each day they took 7,000 steps, or gave them a virtual bank account holding 30 days’ worth of those payments—or $42—and then subtracted $1.40 for each day they didn’t walk 7,000 steps. The second method worked appreciably better.

Overall, as our understanding of how to apply digital health technologies matures, the importance of active patient engagement can only grow. “The conventional model is that we can use technology to bring patients closer to doctors,” Asch said. “I think that’s wrong. We have a shortage of doctors, and doctors are one of the most expensive ways of delivering health care.”

“A better and more sustainable solution,” he added, “is to learn how to be less reliant on your doctor and still get good outcomes.”