Fibromyalgia affects about three to five percent of the population and can appear in people of all ages, including children. More women are diagnosed with the syndrome, though men can develop it as well. The symptoms are chronic but can come and go. At its worst, fibromyalgia can cause severe disability. The central symptom of fibromyalgia is widespread muscular pain, but many other symptoms can be associated with the condition. It is hard to diagnose through lab tests, and its causes are difficult to ascertain. Sufferers often describe their symptoms as being like a chronic flu-like infection that leads to exhaustion, mental fog, sleeping difficulty and stiff and achy muscles. Muscles are weaker than normal and they tend to cramp and knot. Fibromyalgia can also lead to digestive problems, headaches (including migraines), dizziness and problems with balance. 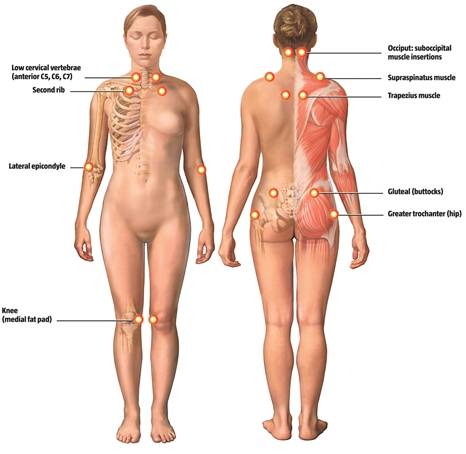 Researchers are investigating the causes of fibromyalgia. One theory is that hormonal or chemical imbalances are having an effect on nerve signaling. The idea is that low levels of serotonin, one of the body’s natural painkillers, lead to increased sensitivity to pain. Other studies link fibromyalgia to injuries or trauma to the brain and spinal cord. Still others believe the cause is an infection or a nutritional deficiency. There is little consensus, except that most experts agree the syndrome probably has multiple causes.

Effective fibromyalgia treatment has been hard to find, but some new developments appear to hold promise. There are new drugs being developed.  Two new drugs currently being tested appear to have some positive effects on fibromyalgia symptoms. One works by increasing levels of serotonin, which reduces stress, and norepinephrine, which helps with energy and focus. The effect is similar to combining an antidepressant with a stimulant. Clinical trials tracked 2,000 patients for six months, and the studies showed significant improvement in pain and physical function. A second drug, a potent sleep medication, has also been shown to have positive effects. Because fibromyalgia sufferers have difficulty sleeping, they often feel better on the rare nights they get deep, restful sleep. Again, clinical trials have shown promising results. Other researchers are experimenting with drugs typically prescribed for respiratory conditions, analgesic pain relievers and muscle relaxers. Most have shown limited effectiveness.

Other new developments in fibromyalgia treatment Canada involve combining medication with alternative therapies, such as massage, acupuncture, oxygen therapy and trigger point treatments. These treatments may stimulate the brain by releasing neurotransmitters, working much the same way as some of the more effective medications. Because fibromyalgia may be caused, at least in part, by nutritional deficiencies, testing for low levels of certain nutrients is often part of treatment. A recent study where patients took magnesium supplements showed promising results.

There is lots of information about the new treatments, what is being developed and where you can find a clinic that specialized in the latest treatment.  Visiting a site like, Stopmypain.info is a good starting point in educating yourself to ensure you get the best advice and treatment possible.

Bio: Fibromyalgia is a very challenging condition to diagnose, treat and live with. There is more information at sites like Stopmypain.info. William Hawkesbury is a blogger specializing in researching about the newest medical clinical investigations, where to find the best fibromyalgia treatment Canada and sharing whatever useful information his research uncovers.