GEORGE TOWN: THE Consumers Association of Penang (CAP) has sounded the alarm over the increasing use of e-cigarettes, notably among youngsters. 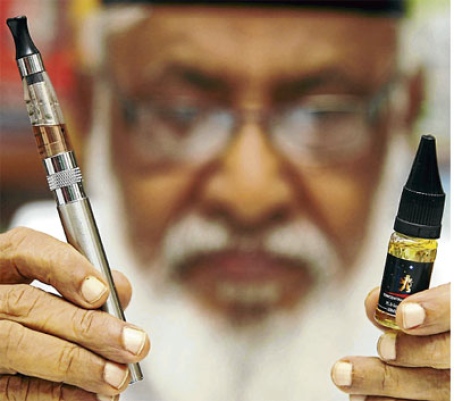 CAP president S.M. Mohamed Idris said there was a need to impose a ban on the sale of e-cigarettes as it may entice more youths into trying and getting hooked on them.

“While there is an age restriction on the sale of real cigarettes, there is no age limit for buying e-cigarettes, and this could lead to more children and youth buying and using e-cigarettes.
“CAP urges the Health Ministry to ban the sale and use of e-cigarettes without further delay.”
First introduced in the Chinese domestic market in May 2004, Idris said e-cigarettes are battery operated devices that use a liquid-filled cartridge containing mint, vanilla, cherry, coffee bean and other flavourings, as well as chocolate, strawberry and caramel.
He pointed out that labels on e-cigarette said that nicotine content in it is 3.6 per cent from the total 10ml liquid content.
“The user places the e-cigarette between his lips and sucks in.
“This action activates a heating element that vaporises a liquid solution,” he said, adding that the vapour was then inhaled.
Idris said the World Health Organisation (WHO) did not consider e-cigarettes to be a legitimate therapy for smokers trying to quit, and that it was not a proven nicotine replacement therapy.

| STEPS TO STOP SMOKING |
He claimed that the e-cigarettes were being marketed as an effective smoking cessation device and were being sold for between RM50 and RM90, while the liquid bottles were sold for between RM10 and RM20, and were easily available in gift shops.
He noted that a survey carried out a month ago revealed that buyers of e-cigarettes were mostly youngsters, with three out of 10 being women.
“Women like it because it has less social stigma attached to it than the real cigarette.”
Idris further cited an instance where a teacher from a secondary school in Penang caught 60 students smoking e-cigarettes.
“While we are appalled with the finding that the use of e-cigarettes is becoming popular among Malaysian youths, it is even more appalling that e-cigarettes are widely used by students.”

This issue has been debate not only from Malaysia but also from other’s country. Read the related links
France considers electronic cigarette ban in public places
E-Cigarettes: New Potential Dangers For Users and a New Ban in Singapore

Rather than use e-cigarette, I think it is better for you to quit smoking using traditional method. Learn the ways to stop smoking by click here .