Researcher from the University of Utah School of Medicine found that a tiny two-minute break from jobs could boosts health. According to their research, people who got up and moved around for at least two minutes every hour had a 33 percent lower risk of dying.

Dr. Srinivasan Beddhu, lead author of the study and a professor of medicine said

“It was fascinating to see the results because the current national focus is on moderate or vigorous activity,”
“To see that light activity had an association with lower mortality is intriguing.”

The research is based on 3,626 participants in the federal National Health and Nutrition Examination Survey (NHANES) who wore accelerometers to measure the intensity of their activity during the day. 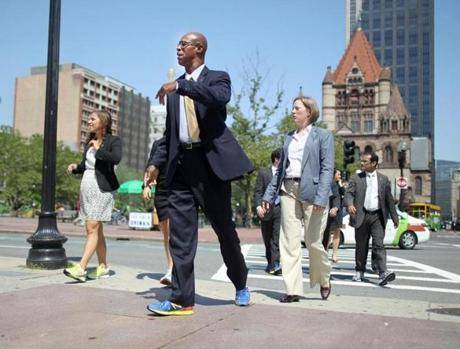 They looked at ‘light’ activites, things like walking around the office, up and down a few flights of stairs, even a short walk to get a cup of coffee.
People who had chronic kidney disease saw a 41 percent lower risk of dying in the time period studied, which was just under three years on average. And those 383 people were also the most sedentary, spending 41 minutes of each hour immobile, compared to 34 minutes in the group as a whole. The study was published Thursday in the Clinical Journal of the American Society of Nephrology.

While many of us are getting standing desks to combat the ills of sitting all day, Beddhu says there’s not enough evidence to confirm solid benefit from standing all day versus sitting. So he suggests even if you do stand all day you may want to add a spin around the office every hour. Day to day, week to week, it adds up, he says.Varying speed while walking may make the activity much more effective.

If you’re awake say, 16 hours a day and you move about two minutes every hour, that adds up to 32 minutes a day. Multiply that by five work days, you end up with 160 minutes per work week of light activity. And if you can do more, even better, says Beddhu. “If you can do five minutes every hour, you can actually end up burning 1,000 additional calories a week.” That can decrease fat tissue and help maintain or even lose weight.

As for that two-minute burst of activity satisfying federal guidelines for physical activity, forget it. You still have to engage in at least 150 minutes of moderate to vigorous physical activity every week. This more intense activity has numerous benefits of its own, including strengthening the cardiovascular system.